Because of the perfect climate, there is nothing like pure maple syrup ... from the mountains of Northern Maine.

Northern Mountains of Maine - Home to the Best Maple Syrup 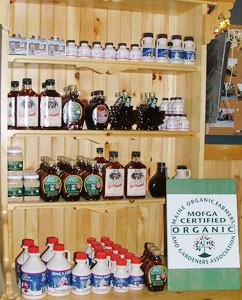 Spring in Maine: when the days lengthen and become warmer, yet the nights are still below freezing in the North Country, this is the sweetest time of the year in Maine-"it's sugar time!"

Arnold Farm Sugarhouse, which is located just North of Jackman on the Hilton Cemetery Road in Sandy Bay Township, began producing syrup in the year 2000 with a tap placed in a maple tree.

The past few years, he has expanded into a modern, commercial maple syrup operation, producing syrup from more than 50,000 taps. The taps are connected to plastic sap pipelines, and with the aid of a vacuum system, the sap flows to the sugarhouse into large storage tanks. From there, maple syrup is made. 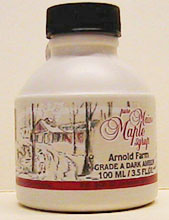 If you come up in the spring, or anytime, stop by and see Claude at his sugarhouse. If he is around, he would love to give you a tour. For more information call 207-668-4110.