Moose watching is a favorite tourist activity in Maine.

When you come into the Jackman region, you are entering prime moose country. Anywhere along Route 201 from the Forks to the Canadian Border and on Route 15 from Rockwood, moose, moose and more moose is what you may find on any given day. 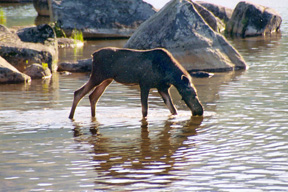 There are certain times of the year when they are out more than others: May, June, September, October and December are the prime months with September and October being the best time to spot a fully antlered Bull...now that is an impressive sight! During the hot summer months, the best viewing times are in the early morning and late afternoon when the air is cooler.

The best moose viewing opportunity has to be seeing one in its own element; out in the woods, while you are hiking, ATVing, or snowmobiling. Don't forget the camera!

If you have never seen one of these large members of the deer family in person, you can not imagine just how large an animal they are. Mature bulls can weigh over 1000 pounds and are about 7 feet tall at the shoulders. SO if you see that flashing moose sign on the highway, stay alert! And remember, although usually moose are not aggressive, they are still wild animals and deserve our respect.

The moose is the official State Animal of Maine.

Moose are large even-toed herbivorous mammals, the largest of the deer family. Moose have very poor eyesight but their hearing and sense of smell are excellent. Moose vary in size and shape. Their color varies from a little brown to a dusty black depending on the season and age of the animal. Calves, in comparison, are often a light rusty color. They shed their winter coats in May-June, giving their coat a ragged look.

Moose have long, lighter-colored legs with the front pair longer than the hind ones. Other features include a long nose, drooping lip, hump at the shoulders and small tail. The flap of skin that hangs beneath the throat is called a BELL.

Only the males have antlers, massive flattened ones averaging 5.5 feet across and 40 pounds in weight. These antlers have as many as 30 TINES (or spikes), the shape differing from animal to animal.

Mature males shed their antlers once a year in November/December and replace them with new larger ones beginning in the spring. They are formed of living tissue supplied by blood through a network of vessels covered with a soft smooth skin called VELVET. Eventually the tissue solidifies, the velvet is scraped off and the antlers become completely formed of mineralized dead matter. Their main function is for display during the rutting season (mating season which is Mid September to mid October) and to show dominance within the herd.

Moose are browsers rather than grazers. They obtain most of their food from aquatic and marsh plants such as horsetails and pondweed. Moose also eat grass, lichen, plants growing on the forest floor, peeled-off bark and leaves from willows, sallows, and poplars. They can even eat under water.

Moose are active throughout the day with activity peaks during dawn and dusk. They are good swimmers and are able to sustain a speed of 6 miles per hour, and can run up to 35 mph.

Moose are not normally aggressive, however, they can be very aggressive when hungry, tired or harassed by people, dogs, and traffic (sounds familiar!).

Females (Cow), starting from around 2 years of age, can give birth. After a gestation of about eight months, 1-2 young ones (calf) will be born in May-June. (Twins are somewhat common but triplets are rare) Offspring can browse and follow their mother at 3 weeks of age and are completely weaned at five months. They stay with their mother for at least a year after birth, until the next young are born.