Jackman Maine, also known as The Switzerland of Maine, is a small town nestled in the North Western Mountains of Maine in the Moose River Valley.


History of the Moose River Valley

Sparkling pure water, tumbling stream, sweeping mountains, and the vast North wood-that's what Samuel Holden found here in 1819. And that's what you'll find here today when you visit this beautiful area. Mr. Holden and his family followed the Kennebec River north to the Forks. From there, they traveled over land on snowshoes, about 30 miles, and settled in the Moose River Valley. Their second home here is still standing on the Moose River Golf Course.

Around 1810, Maine Entrepreneurs established a wagon road in hopes of developing new markets for their products. In Maine this road was called "Old Canada Trail". It was also known as "Arnolds Trail" for Benedict Arnold who used this route to Quebec during the American Revolution. In the 1830's, Captain James Jackman was hired by the state to complete the construction of the road from the Forks to Canada. The town of Jackman was named after the Captain.

In 1888, the Canadian Pacific Railroad hit town, and the area awoke. The lumbering industry went into high gear in the first part of the twentieth century with the opening of the Kellogg Lumber Company at Long Pond in 1906. Lumbering became the life-blood of the area. It remains the major business today though most of the mills are gone. 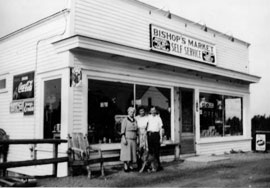 We are part of the Moose River valley as we are nestled in between the mountains to our North and South. The Valley extends north to the towns of Moose River and Dennistown Plantation, east to Long Pond and south to Parlin Pond and is the gateway between Quebec and Maine. Jackman is the center and largest town in this region.

US Route 201 is also known as "Old Canada Road National Scenic Byway". It winds right along side the Kennebec River, Wyman Lake, the Dead River, and vast forests.

As you travel the byway, stop at the different rest areas to read the stories and learn the history of the region. The Attean Overlook rest area, just south of Jackman, offers one of the finest views of the Moose River valley to the Canadian border offering an expansive and breathtaking snapshot of the remote and rugged beauty of this area.

Nearly all of the forest land in the Jackman Region is privately owned by companies, families, individuals, investment groups, and the like. And nearly all of this privately owned land is a working forest. What is a working forest? Although the landowners in the Jackman Region provide free access to visitors to camp, hike, bike, fish, hunt, etc., the money the landowners need to pay the taxes, maintain roads, campsites, etc., is generated from the sale of forest products.

If you plan on being out in the working forest, please follow these simple rules: Stay away from active timber harvesting operations and timber harvesting equipment. Please yield to logging trucks on private gravel roads. Please show respect to these private landowners who allow free access on their land by treating the land as if it were your own. Enjoy your visit to the working forest!


If you drive down Spencer road, off to the right, you can still see evidence of where POW Camps were. There were 4 camps in Maine that housed German prisoners during WWII and this was one of them.


Jackman's tagline is: "the Switzerland of Maine"? What we know is that in the early 60's, as a school project, the children of Jackman were assigned to come up with a tagline for the town of Jackman. The winning student was honored with the town adopting it. We don't know when this happened or who won. Anyone with more information, please contact the JMRRCOC.
Jackman was the best kept secret 20 years ago but now the secret is out. It truly is a peaceful, beautiful place to go. It is a great place for the sportsmen and women.